You are here: Home › Other Sports › Wildcats go down to Manchester. 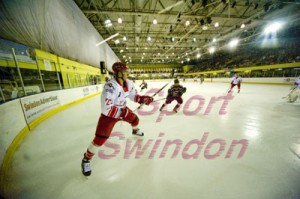 Last Sunday evening the Swindon Wildcats saw themselves take to the road as they travelled to take on Manchester Phoenix.

Jan Melichar against Telford at the Link

With a two point win still fresh in their minds, Swindon were well aware of the momentum gained and the performance needed against the Phoenix side. A dynamic start to the game saw both teams contest well throughout the opening minutes, however when Manchester’s McKinney was found in on net, it was the home side who would gain first advantage.

Tying the scores moments later, the ‘Cats then found a goal of their own as Swedish forward Jonas Hoog finished on a breakaway opportunity against the opposing Stephen Fone. 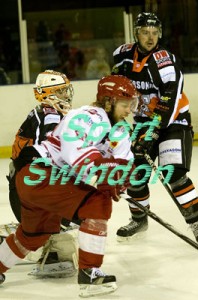 A ‘back and forth’ game then saw the Phoenix once again take the lead, this time with a shot from McKenzie beating a poised Dean Skinns. Following the proceeding faceoff, Manchester would then strike once again as Michal Psurny saw his wrist shot find the back of the net for a 3-1 game.

Coach Ryan Aldridge would then look about calling a timout for the side on the road, as an effort was made to recompose his side as they looked to fight their way back into the nights’ fixture. Whatever was said soon was soon translated on the ice as Finnish forward Matias Perkkio then found the net for a second goal, with the import converting on a breakaway opportunity. 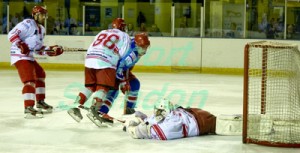 Dean Skinns in action against Slough.

An explosive first period made for an exciting second and within five minutes the puck was once again found in the back of the net. To the fortune of the home side however, it was Manchester who would score. This time with defenseman Luke Boothroyd pushing forward to double the Phoenix’s lead. Yet again another back to back strike by the home side then saw another netted, as Ciaran Long slotted his wristshot past Skinns just over a minute later.

Despite netminder Skinns receiving a nasty slapshot in the mask that would see him take a short break to recover, Swindon were not defeated just yet as a powerplay situation loomed. Forward Aaron Nell quickly gave the Wiltshire side their third of night, after beating netminder Fone from in front of net and closing out the period 5-3 to the home side.

The third period held much the same in terms of action and after Swindon’s Nicky Watt saw his attempt find the net with just over minute gone, the game was back to being a one goal affair. 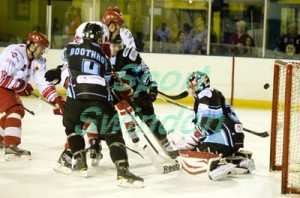 Wildcats v Manchester at the Link

The period held good chances for both sides as the minutes ticked down however it was the Phoenix who would look to hold on with just a minute left on the scoreboard. The next play then held the talking point of the game as Swindon, although netting an equalising goal, were then to see it disallowed by the official as play was haulted around the Manchester net.

Swindon could do little else but to pull netminder Skinns form here as seconds were left and a 6 on 4 opportunity presented itself. Despite this the Wildcats were unable to beat Fone for a fifth time and the Manchester Phoenix collected a narrow two point victory on home ice.

A tough result for Swindon will see them take two points away from the weekend’s action and now look ahead to this following Saturday as they entertain the Guildford Flames.