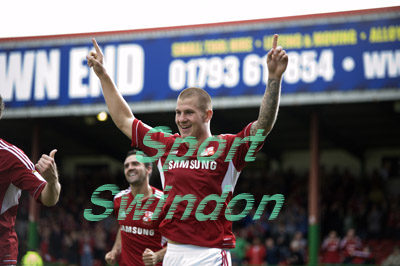 Swindon Town are celebrating, and not for the first time under highly rated manager Paolo Di Canio. 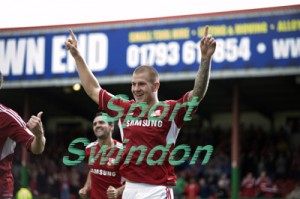 James Collins celebrates his goal at the County Ground against MK Dons.

Swindon made the trip to the Potteries a possible upset waiting to happen and when James Collins (27 & 41), put the Town 2 up by half time the writing was on the wall.

However Stoke, who held the mighty Arsenal to a 0-0 draw at the weekend, hadn’t read the script.

Second half goals from Jones (63), Walters (86) brought the game into extra time.

A powerful header from Aden Flint from a Matt Richie Corner flicked on by Nathan Thompson put the Robins back in front, but again against the script, England international Peter Crouch headed a Jon Walters cross past Foderingham, and the dreaded penalties loomed. 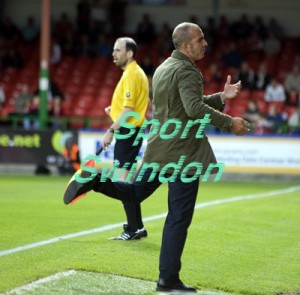 Dancing for joy paolo Di Canio during the weekends game against MK Dons at the County Ground.

With minutes to go, Swindon reverted to script and with Stoke keeper Thomas Sorensen pushing the ball in the air to Matt Richie who then headed across goal for the unmarked James Collins to grab his first hat trick for the town.

Fortress Stoke has been breached,  and Di Canio praised the team effort, ‘When you win against a side like Stoke, where Manchester United and Arsenal find it difficult to score one goal, it is a good win because this is a fortress,’ said Di Canio. ‘I am very proud. This is a special moment for my club. One of the best in our history.’

Who next? 3rd round draw takes place on Thursday.