You are here: Home › Other Sports › Roll Up Roll Up Big Roller Derby at the Oasis.

Roller derby is a fun, fast paced, quad-based, contact sport that requires a lot of skill, agility and cunn 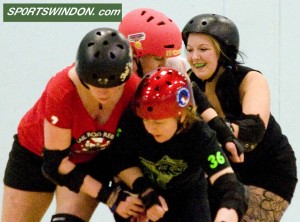 Originating from the US, the UK has seen a consistent rise in its popularity where it is now being considered as a new sport in the 2020 Olympics.

March 2012 saw the collaboration of eager skaters who have successfully formed and developed Wiltshire Roller Derby (WRD). Wiltshire’s only roller derby team is run by skaters, for skaters with the aim of providing entertainment whilst promoting a fairly new sport.

WRD’s first year has been successful and has seen them being invited to take part in two tournaments last year rolling into 2013.

A double headed bout will be hosted by the home team – WRD! As one of the last meetings of the

There will also be stalls hosted by local businesses selling crafts and general goodies; a strong appearance from the Youth Life Project and

the Cadets; raffles, tombola’s and many more family friendly activities.

grow. They would like to take the opportunity to invite you to the home game so you can see what

they do, how they’re run and meet the team. Please visit the website and complete the contact us

section. They will then send you a ticket for you to attend this great game.