You are here: Home › Other Sports › The Storm hits Swindon after a 20 year lay off.

Now that the NFL (America’s National Football League) regular season has finished and is moving into the playoffs, it’s the time when the British American Football teams begin preparing in earnest for the start of their season. Their plans will includes the newly accepted Swindon Storm who go into into the National League South. 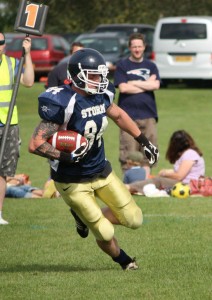 After a long hard period proving themselves to the National League during an associate period, the Storm successfully completed 4 games against local rivals and have been accepted to play competitive football in the summer of 2013.

For the first time in nearly 20 years, American Football has returned Swindon. 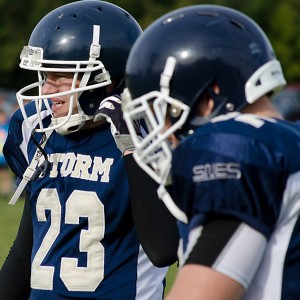 Now the hard work really starts with the preparations to be made for league games against such teams as the Bristol Apache, Bournemouth Bobcats and the Oxford Saints, giving another opportunity for a fierce sporting rivalry between Swindon and Oxford.

With the NFL travelling to Wembley Stadium twice in 2013 American Football is a fast growing sport in the UK once more and now is a great time to get involved.

Training starts officially on Monday January 7th, with the first couple of sessions dedicated to those who are trying the sport for the first time, so if you have watched the NFL on TV and fancied giving it a go, then don’t wait, get involved. You can come and try out with no obligation and the first four sessions are absolutely free to newcomers.

s at 6 45pm and training finishes at 9 30pm. The first 4 training sessions are completely free and all equipment is supplied by the club. New players will need to bring trainers football/rugby boots, shorts T shirt and sweatshirt. No previous experience is necessary, as all skills are taught by the team’s qualified and insured coaching staff.

The team is accredited and funded by Swindon Borough Council’s Sports forum.

Head Coach Steve Bennett is looking for new players to join the ranks. “We have been developing the infra structure of the club over 2 years, getting the staff qualified and experienced and we’re now recruiting to push up the number of players.

Every position in American football is almost a sport in its own right with the opportunity for people of all shapes and sizes to contribute. Swindon Borough Council’s funding has allowed the club to buy enough helmets and shoulder pads to allow prospective new players to try the sport without having to pay for new equipment. “Rookies” can play their entire first season buying nothing more than a gum shield and a pair of boots.”

The exposure of the NFL’s international series in Wembley every Oct has meant possible new players are calling and emailing the club on a daily basis. Bennett adds ”Retention of the new players can be an issue when they realise it’s not for the faint hearted!”

The club has secured sponsorships from local gym Pro Strength and Fitness and SNES Sports Nutrition retailer with benefits being passed onto players.

What is American Football.

American football, known in the United States simply as football, is a sport played between two teams of eleven with the objective of scoring points by advancing the ball into the opposing team’s end zone by running with it or throwing it to a teammate. Points can be scored by carrying the ball over the opponent’s goal line or catching a pass thrown over that goal line, kicking the ball through the opponent’s goal posts, or tackling an opposing ball carrier in his own end zone.

American football is closely related to Canadian football but with some differences in rules and the field. Both sports can be traced to early versions of association and rugby football.

Pictures from Toby Mason and Puttyfoot.com 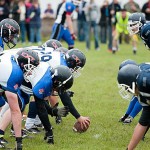 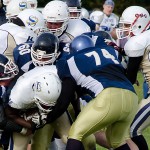 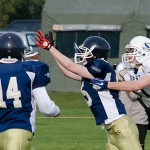 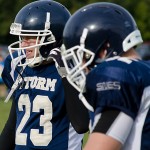 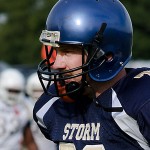 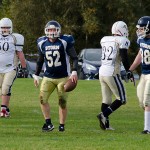 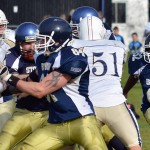 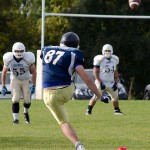