Joseph Compton is proving to be a lucky mascot. 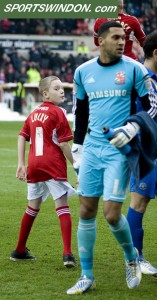 hunderstorm in the late summer Joe was hit by lightning as he waited outside Dorcan Academy in Swindon for a lift home. 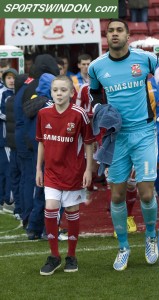 The bolt of lightning caused his heart to stop, burst his ear drums and caused severe burns across 22 per cent of his body, as a result he spent weeks in hospital.

Yesterday, the Swindon and Arsenal fan lead the Town onto the pitch at the County Ground, as one of the mascots.

Wearing his LUCKY 1 Swindon Town shirt, he walked out of the tunnel with keeper Wes Foderingham and lined up with officials and sponsors for pictures at the start of the game.