You are here: Home › Other Sports › Kate and William meets England football squad.

The Duke of Cambridge has given the royal seal of approval to the new National Football Centre at Burton-on-Trent which it is hoped will help delivery long term glory to the England team. 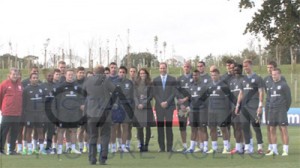 The Duke, who was joined by his wife the Duchess of Cambridge, formally opened the £105 million St George’s Park project which was first muted more than a decade ago.

The aim is for the 330 acre complex to produce more and higher quality coaches – and with it better players to give England the best chance of becoming a major footballing force.

William, who is president of the Football Association, said: “Coming here and seeing these wonderful facilities gives the same feeling as when I first went to the Olympic Park.

“It gives me great pride we have created in this country facilities that are beyond compare anywhere else.

“St George’s Park is a concept totally new. It will provide more than just world class facilities for our national team and more than a university from which hundreds of coaches will graduate. 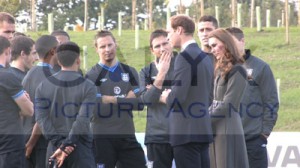 William chatted with and shook hands with members of the England side at the climax of their training session, including Ashley Cole, who has been charged with misconduct after his Twitter tirade against the FA, while The Duchess talked and joked with Frank Lampard. 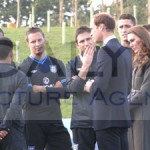 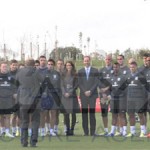