You are here: Home › Other Sports › Swindon Speedway › Swindon v Poole – top of table clash at the Abbey. 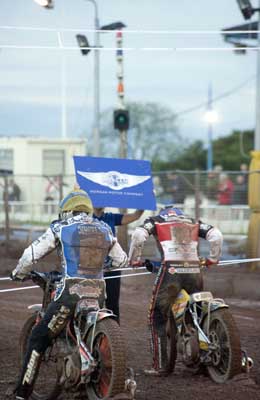 SWINDON face title rivals Poole in what promises to be one of the biggest meetings of the regular Elite League season at the Abbey on Thursday (7.30).

Many experts regard this as a rehearsal for the play-off final and a bumper crowd is expected with many overseas fans on their way to Cardiff for the British GP on Saturday. 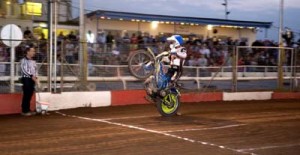 Doyle does a victory wheelie 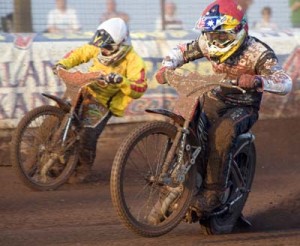 Robins have both Jason Doyle – a former Poole rider – and talented youngster Nick Morris available to slot into their double-up roles.

Boss Alun Rossiter said: “This is going to be a tough meeting but we are confident we can get the right result.

“It’s still the school holidays so I guess a lot of people might even start their weekend on Thursday night with the GP on Saturday!

“My riders will be completely focused and we will give everything to try and beat Poole. We did it recently but they didn’t have KK (Krzysztof Kasprzak) and the conditions weren’t ideal. This will be a terrific meeting.”

Stead in line up

Speedway legend Neil Street, who died during the winter, will be inducted into the Robins Legends Lounge at the meeting.

Neil’s Grandson, former Swindon rider and triple World Champion Jason Crump, will be in attendance along with other family members including his two sons.

Poole go into the meeting on the back of a home win over Wolverhampton on Wednesday.