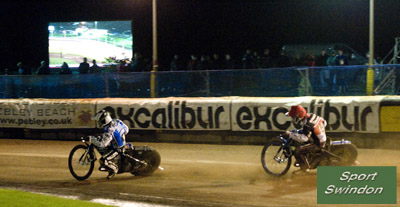 SWINDON moved up to second in the Elite League table despite suffering a 48-42 defeat against Eastbourne at Arlington.

After a tight affair, the Excalibur Communication Robins came out with a point to move above Kings Lynn on points difference with both sides level on 21 – five behind league leaders Wolverhampton.

Despite finding themselves six behind after two races, the visiting Robins fought back to take a two-point lead in Heat 7 – yet the Eagles came on strong to take a narrow victory.

Aussie racer Troy Batchelor bagged paid double-figures despite being the victim of a controversial Heat 13 exclusion, whilst reserve Ashley Birks enjoyed much improved fortunes – earning his first race win in Robins colours on his way to 7+1.